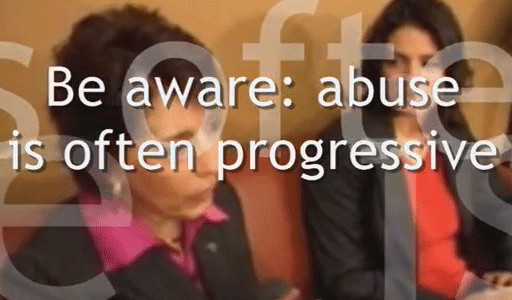 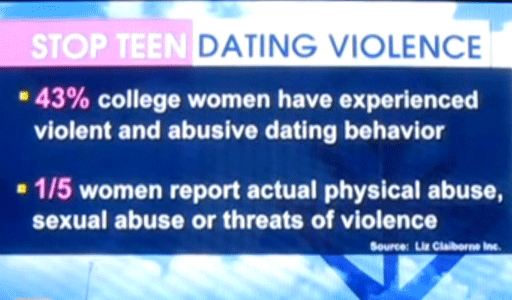 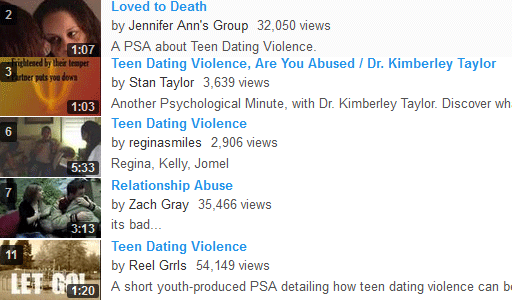 Playlist of dozens of educational videos about teen dating violence. 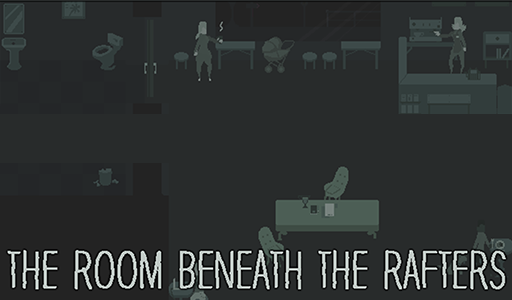 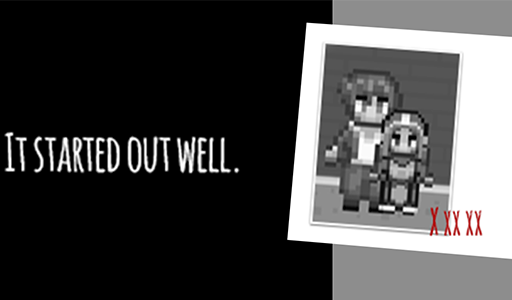 LEAVING is an award winning video game about dating violence. Leaving can be the most dangerous time in an abusive relationship. LEAVING can be downloaded to play on your Android smartphone or tablet. 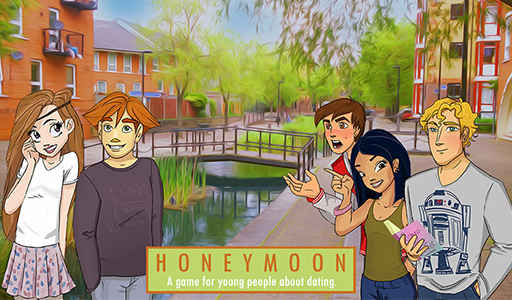 HONEYMOON is an award winning vidoe game about dating violence which allows the game player to select their gender and teh gender of their crush - an important reminder that dating abse can affect anybody regardless of gender or sexual orientation. Play HONEYMOON online or download to your smartphone or tablet today. 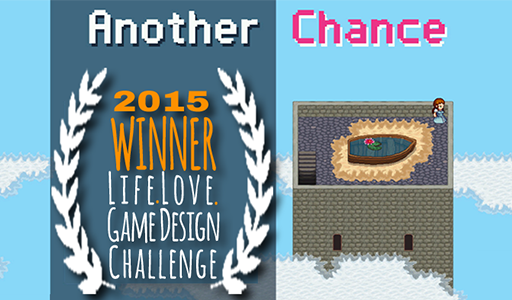 Another Chance is a free game about relationships. Help Emily find out what is going on with her boyfriend while she sets off on an adventure to rescue him. Another Chance is available in English and French and can be played online or downloaded to Android smartphones and tablets. 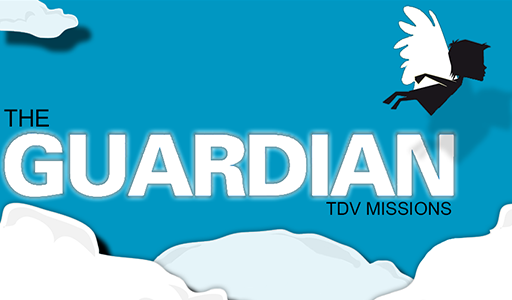 The Guardian is an award winning vidoe game about dating violence. You are in control of a Guardian and are responsible for keeping three young people free from relationship abuse: 13 year old Sarah, 18 year old Jack, and 21 year old Kim. Observe the scenario and then navigate through the complex social lives of these young people in order to inform them about the unhealthy behavior they are experiencing. The Guardian is available to play in English and Spanish. 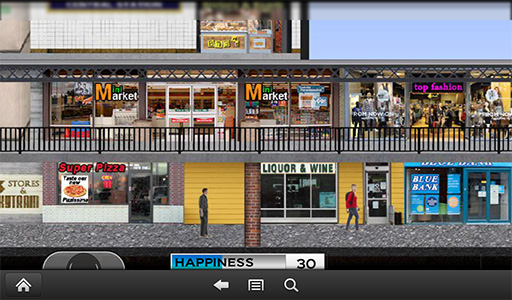 shares the story of teenage relationships from different perspectives. Play as Tomas and as Lily in this game which has been called an "eloquent method of outlining significant phrases and behaviours that will help one to identify an abusive relationship." 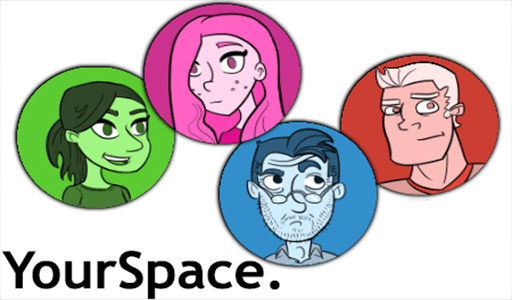 This award winning game from Ireland does a wonderful job of illustrating how social media sites are often used in abusive relationships. A 2009 study by MTV and Associated Press revealed that 1/2 of all people age 14-24 say their dating partner used technology like texting, email, or a networking site like Facebook or tumblr to harass them! 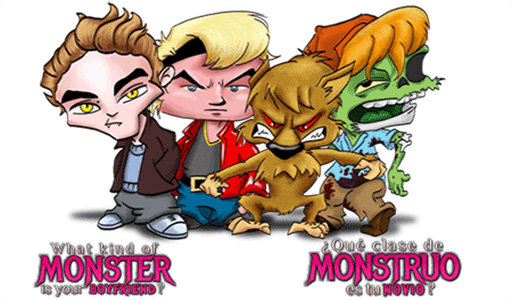 What Kind of Monster is your Boyfriend takes a light-hearted look at our culture's fascination with teen vampires, werewolves, and zombies. This is our first bilingual game and can be played in either English or Spanish.

Print these educational resources at home, school, or the office and share this important information about teen dating violence.

These infographics from Jennifer Ann's Group are great resources for schools, churches, and other organizations looking for reference tools to increase awareness and provide educational information about teen dating violence.

Save, share, and print the full-length teen dating violence infographic or any of these mini-infographics. 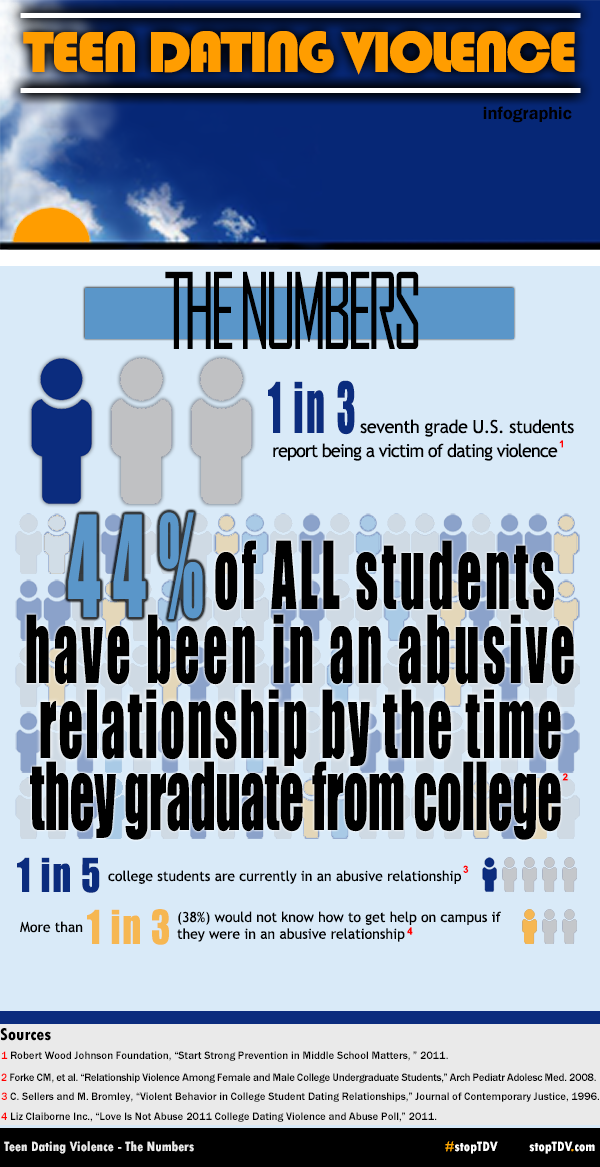 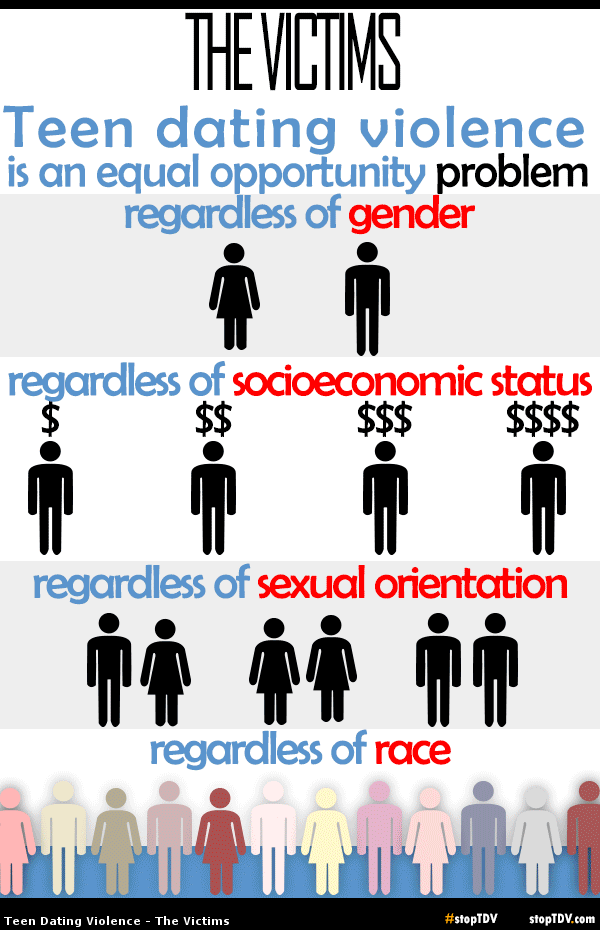 TDV Infographic: The Types of Abuse 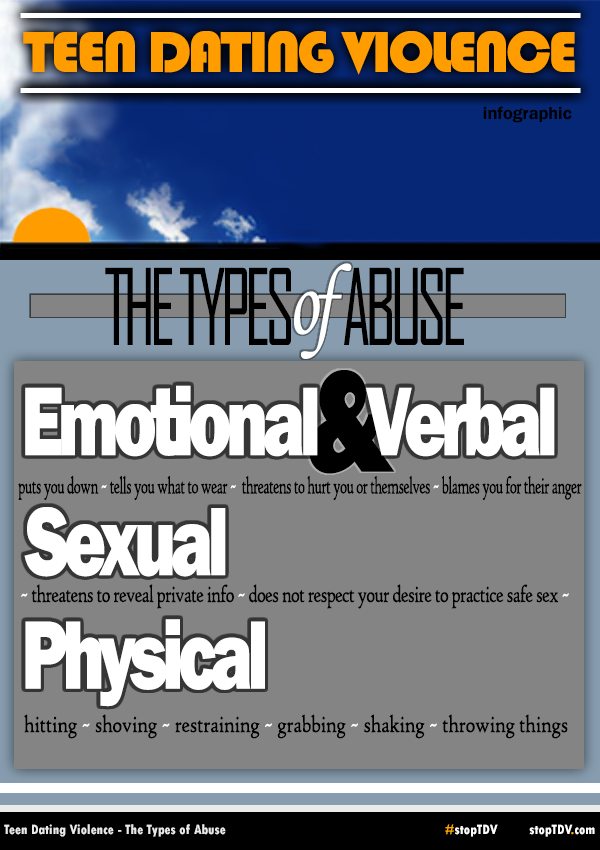 TDV Infographic: The Use of Technology 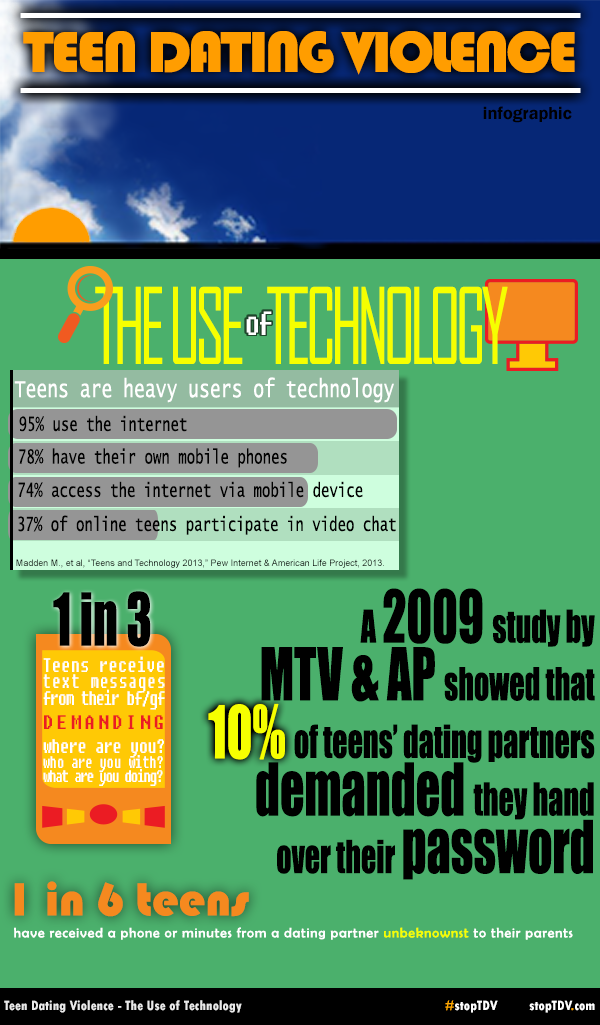 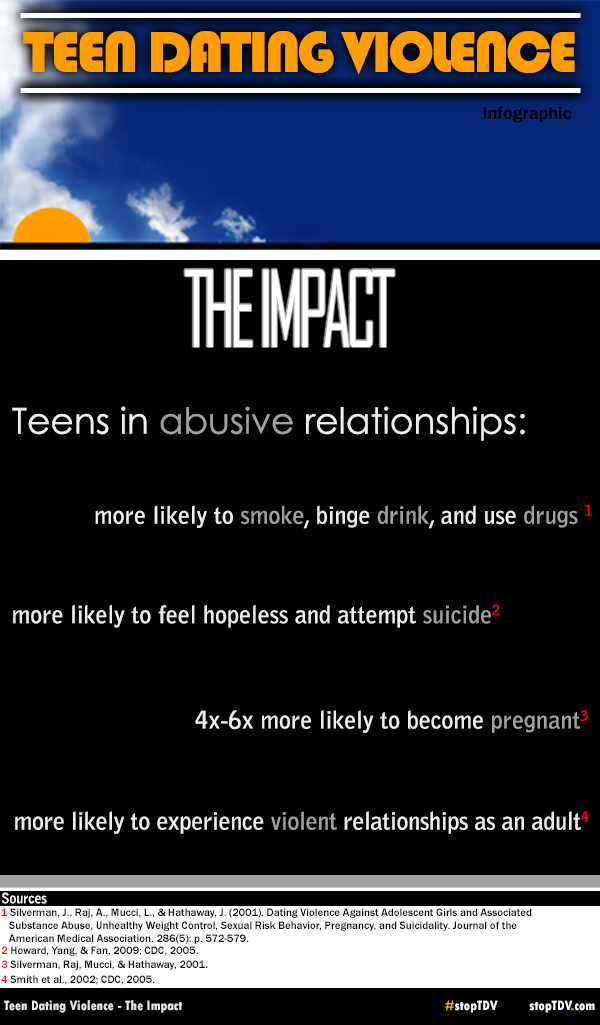 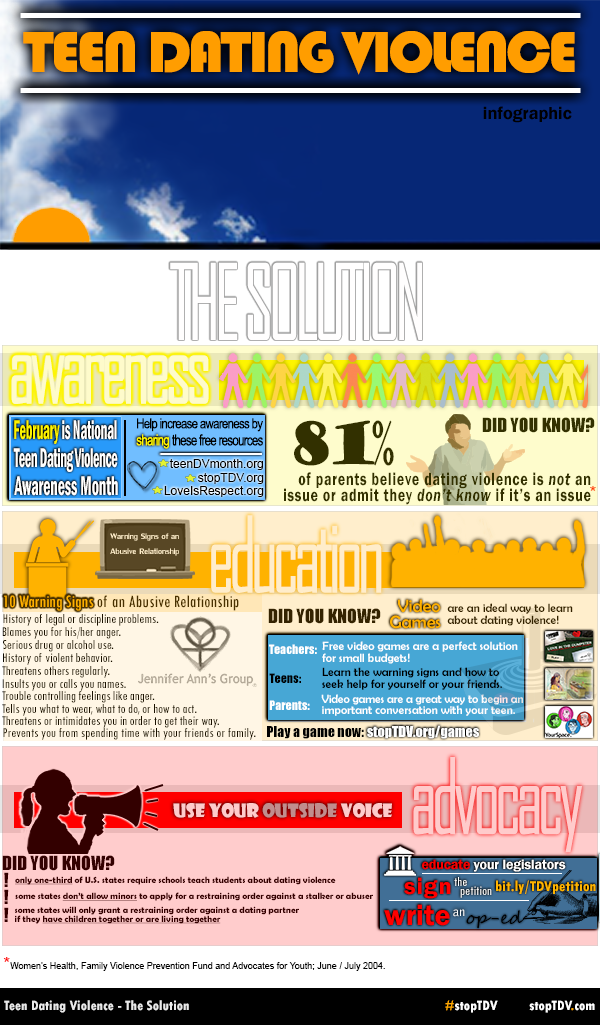 These bookmarks to #stopTDV are now available for download so that you can print them at school, home, or the office.

The front of the bookmarks has a reminder of the prevalence of dating abuse, with the statistic that 44% of all college students have been in an abusive relationship by the time they graduate from college.

The back of the bookmarks has a ruler, a list of commonly misspelled words, math forumulas for area and volume, a scannable QR code providing access to teen dating violence video games, the ten warning signs of an abusive relationship, and the phone number for the National Dating Abuse Helpline.

Just click on each image to download the high-resolution PDF images for easy printing. Printed size is 6.13" x 2.13".

Just click on the power and control wheel image to download the high-resolution PDF image for easy printing. Printed size is 8.5" x 11". 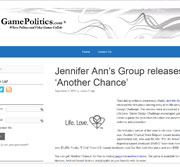 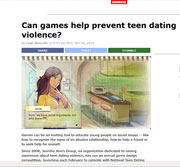 Games can be an inviting tool to educate young people on social issues -- like how to recognize the signs of an abusive relationship, how to help a friend or to seek help for oneself.
Since 2008, Jennifer Ann's Group, an organization dedicated to raising awareness about teen dating violence, has run an annual game design competition, launching each February to coincide with National Teen Dating Violence Awareness and Prevention Month (I've acted as a competition judge in a couple of the years). Last year's winner, The Guardian, is available on the Android store.
Read the full article at BoingBoing 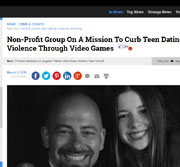 Video games are often criticized for glamourizing murder, drug abuse and other criminal behavior. However, for Jennifer Ann’s Group, founder Drew Crecente wants to change the perception of video games by showing that they can be an effective way to reach today’s youth and teach them about the seriousness of teen dating violence.
Read the full article at Examiner 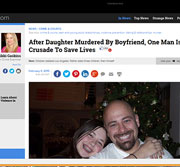 With February deemed ‘Teen Dating Violence Awareness Month,’ Atlanta native Drew Crecente is on a mission to save lives.

Dating violence among teens is alive and real, and the statistics show a startling trend. In Georgia, the rates of teen dating violence mirror national statistics from the CDC with nearly 13 percent of females and 12 percent of males in high school reporting being physically hurt by someone they were dating.


'It’s a problem that many people do not want to think about, and so it is not discussed as often as it should be,' stated Drew Crecente of Atlanta.


'There was little news coverage of TDV until 2006 when the National Awareness Week began.'

Read the full article at Examiner

Teen dating violence is a pervasive problem that affects millions of adolescents worldwide. Although there have been various approaches to addressing this problem, using videogames had not been employed before 2008, when Jennifer Ann's Group, an Atlanta, GA–based nonprofit organization, created an annual competition. The Life.Love. Game Design Challenge rewards game developers for creating videogames about teen dating violence without using any violence in the games themselves. The resulting videogames have increased awareness about teen dating violence and provided educational information to assist adolescents, parents, and teachers in identifying abusive relationships.
Read the full article at Games for Health Journal

Across the country there is exciting and innovative work being done to address teen dating abuse! This summer, our National Youth Advisory Board sifted through dozens of nominations and selected the top 10 Trailblazers. These Trailblazers are programs our NYAB found to resonate with youth experiences of relationships and were innovative in their approach, outreach, or youth activism. Each week of TDVAM we will feature programs that deserve recognition for this work, and encourage you to share these ideas with your own organizations or local activists. This spring, submit your local program on Break the Cycle’s website for our National Youth Advisory Board’s selection of a second year of Trailblazers!
Read the full article at Teen Dating Violence Awareness Month from Break the Cycle 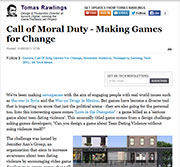 We've been making newsgames with the aim of engaging people with real world issues such as the war in Syria and the War on Drugs in Mexico. But games have become a diverse tool that is impacting on more that just the political arena - they are also going for the personal too. Into this interesting space comes 'Love in the Dumpster' - a game billed as a 'serious game about teen dating violence'. This unusually titled game comes from a design challenge asking games developers; "Can you design a game about Teen Dating Violence without using violence itself?"
Read the full article at The Huffington Post 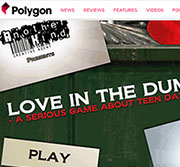 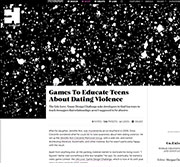 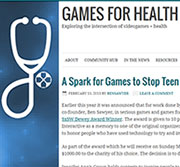 Technology is often leveraged against people in abusive relationships and because teenagers and college students are heavy users of technology they are disproportionately affected by these abusive practices. According to a 2007 study 67% of teens own cell phones, 93% use the internet, and nearly half visit social networking sites daily


A 2007 survey revealed that one-third of teens say they have received up to thirty text messages in one hour by their dating partner demanding to know where they are, who they are with, or what they are doing.Horror stories include a 16-year-old whose ex-boyfriend paid four friends to help him send abusive text messages while he was asleep or at work.


A 2009 study by MTV and the Associated Press revealed that over ten percent of the teens surveyed had previously had a boyfriend or girlfriend demand to hand over their password. Further, 68% of those that shared their passwords have been a target of abuse via technology as compared to 44% of those who had not shared their passwords. Additionally, nearly one in five (18%) teens say their dating partner used a networking site like Facebook or MySpace to harass them . . .